The Man Behind The Camera 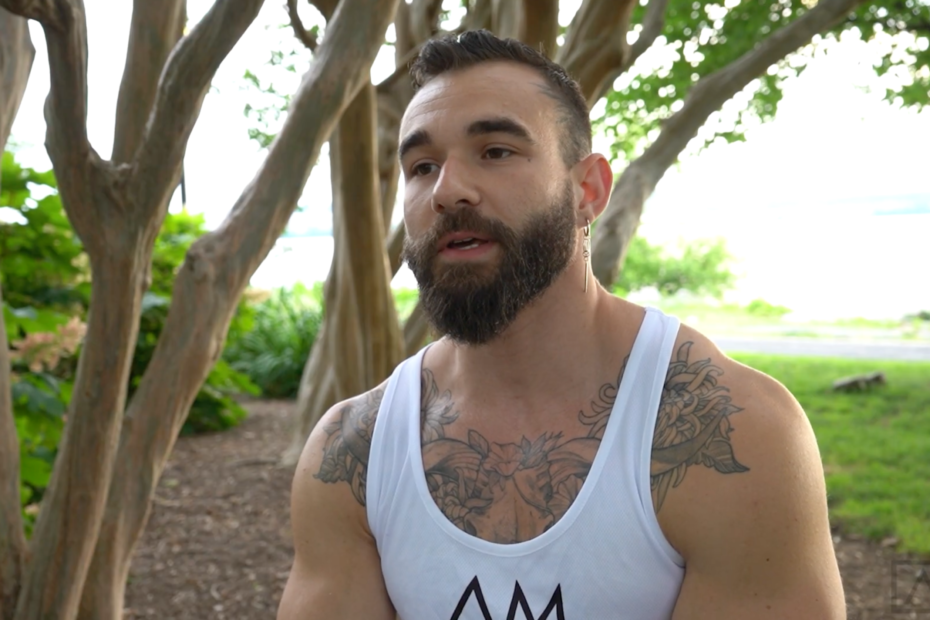 This is the text of Rob’s interview with The Aesthetic Male. You can watch the interview on TAM’s Youtube channel.

I’m a photographer, artist, and bodybuilder. A blanket statement of what I’d be is: Artist. Everything I do comes from a place of wanting to create, even bodybuilding.

I have images in my mind that I want to create and because I can’t draw them, I have to make them in 3D space and the camera’s just the best tool to capture it.

The aesthetic of a camera body, its compact nature and its usefulness all together, for some reason, just caught my attention one day. And there’s a certain quality to my favourite photos that made them special and I was trying to figure out like what that quality was, which inspired me to try and create it myself.

You can tell a beginner photo. I had my beginner phase and I shot a lot of beginner photos and things didn’t really change until I picked up a film camera because then every shot started costing money. So then I became more intentional with my compositions and what I was trying to accomplish. That was the game-changer for me.

But yeah, I’m self-taught, it was a mix of trial and error. With the internet, you can teach yourself anything, so I learned the basics. Pretty much now I kind of do my own thing and kind of break the rules a little bit to fit my style.

If you asked me, I’d be like, “I’m a film guy at heart.” I like tactile things. I like the physical nature of it. I like to feel the camera work. It’s like the difference between driving an automatic car and a manual car. The combination of using a full manual camera and having to focus on your settings at the same time as observing your surroundings, there’s no room in your head to think about all the things that are constantly going. You’re just purely in the moment. Yeah, being observant. It’s like a form of meditation.

A lot of my inspiration will just come from my thoughts. I’ll get an aesthetic image in my mind and I just have to make it, and that’s just something I was born with. Most of the time, I don’t force it. I think creativity is like… It’s ethereal. It kind of just comes to you from an outside source and you can’t control it. So when it’s not there, I don’t force it.

But most of my version of telling a story is like finding someone’s style aesthetic – everyone has an energy they bring when they walk into a room. Trying to find what that is and then visually show it with their entirety and the location. And then also little micro, tiny details – how they decide to dress and things like that. I think if you put them all together, you stream it all together, it’s almost like you get to explore the person or the place and hopefully, the vibe will come across.

The goal is to just make something. Whether I’m famous or popular or nobody knows me, I’m already doing the goal of photography itself.

A lot of my life has followed this pattern of I get a career, I try and make it work, it feels like I’m swimming upstream, I fail, I have to move back in with my parents and then I’ll build up my confidence and I do that again, over and over, since out of high school, because just something about doing the same meaningless thing for forty hours every week, like two-thirds of your life, just kind of drains me. And then once the reality sets in, it’s like this doesn’t stop ever until you’re old. Unless if you’re lucky, you know? So it just felt like I wasn’t living. I was living to work and not living and I saw no end in sight.

That’s when I realised that time was my number one most important internal value. It still took me a while to figure out, or take the jump into going all-in. Nothing I wouldn’t try. It was just like, what else can I trade for money other than my time?

I’m more critical of doing photos of myself, for sure, because it’s yourself. I mean, everyone’s critical of themselves. You put a spotlight on sexuality and being dominant, Rob Steel’s an amplification of that so when I’m in front of the lens, I’m Rob Steel and when I’m behind it, I’m a photographer.

I remember my first memory of muscle. I was like six, it’s like a fuzzy, early memory at my babysitter’s house. And she had probably teenage sons, but they looked like adults to me. I remember he flexed his bicep and I remember it looking like this…

He had like a ball. So it was that – the want to have a body like that has always been there – that’s what jump-started me. That mixed with feeling beneath and lower, in a lower place than everyone else. A lot of my energy was coming from like, I have something to prove and build up.

In high school I found the weight room. Didn’t know what I was doing, but I was trying really hard. I was trying more than anyone else and it was the first thing I was good at in my life. So I went all in and because of that, it became my identity for a while. This was like the perfect storm. I became obsessed. Consumed.

For years I would quit jobs if they affected my ability to eat meals and stuff like that. I’ve ruined a lot of careers and I’ve ended important relationships because I don’t fit. A lot of people want balance, a normal life, and stuff like that. And some of the things I want, you can’t have it if you have balance. I’m on all the time, on point, you know? So I think the biggest thing is just you don’t fit with a lot of general public.

Through this entire time, I am operating from a place of bitterness. I got a chip on my shoulder. I got something to prove. I’m going to be a pro. And then I started winning local shows and people started telling me like, “You can go pro.” And as soon as people started telling me, “You could go pro,” it lost all its fun because it’s like, “Oh, they see it. They see the thing that I’ve known this whole time.”

Go to the gym, bring the intensity, which is like sending a message of like, “Hey, body, you need to change,” and then allowing your body to make the change rather than breaking it down and sending another message. And most important is form. How are you moving the weight, time under tension. You’re trying to lift the heaviest amount of weight possible with the most control as possible. So if you can live under the bar when you’re squatting and just pause down there for like three seconds and take three seconds to go down, you’re going to look like you live under the bar because I was never supposed to be big.

The reason my physique looks so good and it looks so big is because my skeletal structure is small and I fit a lot of muscle on there that’s not supposed to be there. So it has like this exaggerated X shape to it.

Consistency, you just need to show up every day, no matter what, even if you like… There’s no straight path. There’s many ups and downs and even months and weeks where it feels like you’re going nowhere and you just got to keep getting back up over and over. You just be relentless. That’s the only trick, just keep pounding away and eventually, the universe will hand it over to you.

Go visit The Aesthetic Male on Patreon. You can find a ton of hot, extra content released only to patrons.

Support The Aesthetic Male on Patreon

Get updates. Don’t miss a thing.

The best way to stay up to date with what’s happening in Rob’s world is to join the newsletter.

Every couple of weeks, we send updates on new art print and video releases, exclusive content, highlights from Rob’s socials, new blog posts and news about his adventures in art and his travels. If urgent news like a livestream or event is happening, we sometimes send out short, additional bulletins.

The newsletter is the only place that brings it all together. Sign up and don’t miss a thing.