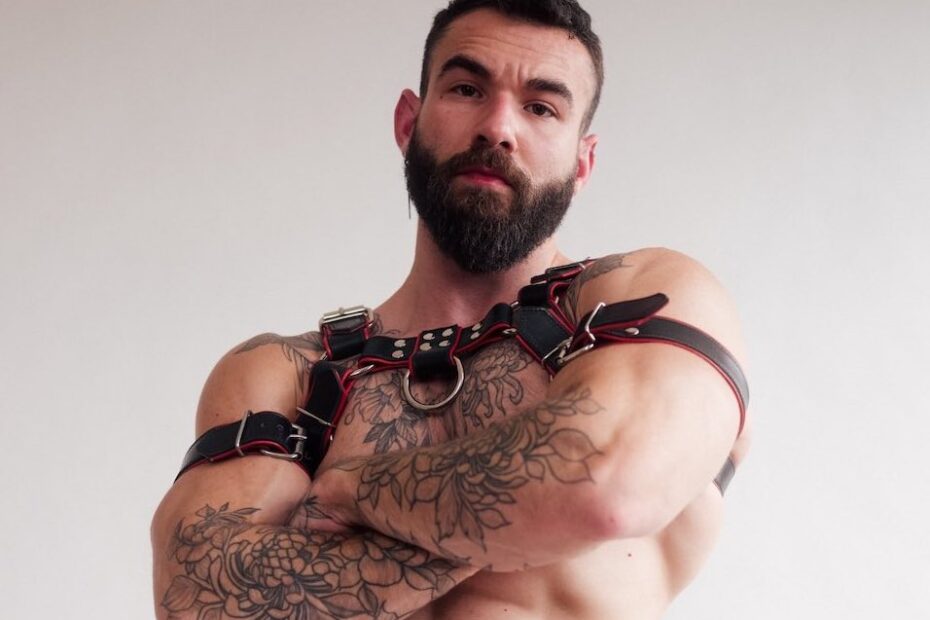 Rob is a three dimensional human being. He’s masculine, artistic, creative, playful, sexy… but what’s always there, whether it’s on the surface or not, is dominance. Rob is an Alpha dominant and that powerful, aggressive energy simmers through everything he does. If you’re drawn to that energy, at some point you’ve probably imagined seeing Rob dressed as a leather daddy – I know I have!

Rob gets called “Daddy” all the time (which at one level is kind of funny for someone in their mid-twenties) and his calm, warm, in-control demeanour reassures boys and girls alike that they’re in safe hands.

One of Rob’s subs felt so inspired by his feelings and so passionate about this image of Leather Daddy Rob that he bought a harness and a pair of armbands from Mister S Leather in San Francisco, just in the hope that Rob would use them in a shoot. And he did! Two shoots, in fact. They’re nice pieces, well-made with some red piping acting as a highlight on the black leather.

The first shoot echoes the black and red of the leather gear with a red light against a dark backdrop. Rob hits a series of poses from bodybuilding classics to that very sensual stretch with only his hand masking his cock. Lots of warm, sexy daddy energy radiating particularly from the double biceps pose, like he’s about to seize you in a hug. The series gets hotter from there, but those shots are subscriber-only – check out Rob’s OnlyFans to see what’s behind the hand.

Some of this shoot appeared on Twitter and Rob realised it was so good that he’d make a pretty great model for Mister S, so he asked for our help to get their attention.

So when Rob gets some free time to get to San Francisco for a shoot, we can look forward to seeing him modelling some other Mister S gear which is a pretty exciting idea.

The second shoot is a different look. It’s a plain, white backdrop. Lots of natural light. Perhaps there’s a narrative from “leather club after 1am” to “get on your knees for Daddy” later that day. We can dream.

That one shot where Rob stares right at you with his arms crossed… phew. Don’t we all just want to do what Daddy wants and make Daddy happy?

I doubt we’ve seen the last of this outfit – it’s too hot seeing Rob in nice leather gear and I bet he’s got more ideas of what he could do with it.

Just like the pink underpants shoot, this came about because a fan helped get some gear that inspired Rob’s creative vision. Maybe someone will pay to get him fitted with some quality leather jeans, maybe some gloves or gauntlets. Maybe you’re that someone? Chat to Rob on OnlyFans if you’re into the idea of making more leather shoots happen.

Get updates. Don’t miss a thing.

The best way to stay up to date with what’s happening in Rob’s world is to join the newsletter.

Every couple of weeks, we send updates on new art print and video releases, exclusive content, highlights from Rob’s socials, new blog posts and news about his adventures in art and his travels. If urgent news like a livestream or event is happening, we sometimes send out short, additional bulletins.

The newsletter is the only place that brings it all together. Sign up and don’t miss a thing.